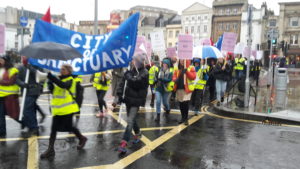 Two hundred people gathered at the City Hall on Sunday afternoon, in the freezing rain, sleet and snow, to walk through the city centre in a display of solidarity with refugees, who flee their homes, make terrifying journeys and living in appalling conditions around the world.  The focus of Sunday’s  Sanctuary Walk was on the UK government policy of refusing asylum claims and then making people destitute, denying them anywhere to live legally, and with no permission to work.   We know that at least 60% of Bristol’s refused sanctuary seekers have eventually won their claims for asylum and so were wrongly refused initially.  But they have been through many years of absolute poverty before having their claims recognized.

The walkers were addressed by 3 of Bristol’s refugees, faith leaders  Rev Richard Makay, Rev David Alderman,  Councillors Ruth Pickersgill and Cleo Lake, Rob Wotherspoon from the CWU, Kerry McCarthy MP,  Dr Liz Murphy, and there were messages of support from Mr Arif Khan from the Bristol Council of Mosques, and the Mayor.

A big thank you to friends at the John Wesley Chapel in Broadmead, welcoming the walkers with warmth and cups of tea.

Together we will create a welcome for refugees and reverse the inhumane policy of forced destitution.

You can add your name to our Dignity not Destitution statement here.