All roads leads to Bristol to End Asylum Destitution… 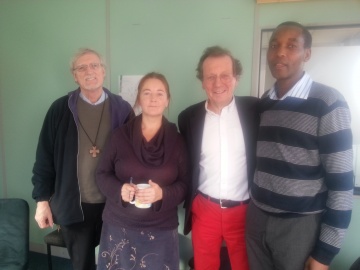 BRISTOL City of Sanctuary is hosting the first joint national conference between local authorities and the refugee & voluntary sector to focus on ending the scandal of asylum destitution in the UK.

Destitution is the big issue we have been campaigning on since last year, and as part of Still Human Still Here, the campaign to end destitution of refused asylum seekers, Bristol City of Sanctuary is organising this public full-day conference on Friday 6th March 2015, entitled: “Ending Asylum Destitution Conference”. The conference is about positive ways forward to end asylum destitution in the face of “unworkable, inhumane and unsustainable policy”.

The conference is being sponsored by Bristol City Council and will be opened by the Mayor of Bristol, George Ferguson. Speakers at the conference will include Sarah Teather MP, Chair of All-Party Parliamentary Group on Refugees, Kerry McCarthy MP, and Stephen Williams MP, sanctuary seekers who have experienced destitution. There will also be a series of workshops, creating a space for people from around the country to share examples of good practice with the aim of learning from each other and working to end asylum destitution in the UK.

The conference will also see a signing and endorsement of a statement to end asylum destitution and Bristol City Council has already approved the statement. Mr Ferguson will lead the signing of the statement.

For further information email us at [email protected] or Mobile: 079 82136368. Follow the day #endasylumdestitution