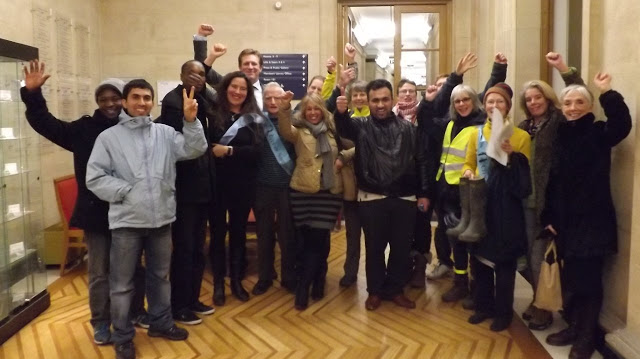 BRISTOL became the second city across UK after Glasgow to take a stand against asylum destitution.

At their first Full Council meeting in City Hall in 2013 the motion was passed with the support of all the Labour, Lib Dem and Green Councillors.

It was carried with full support from 80 percent councillors from across the political spectrum voting in support of a motion by Cllr Ron Stone, Deputy Leader Labour group and an amendment by Lib Dem’s Fi Hance requesting the new “City Mayor to write on behalf of the City Council to the Minister of State deploring the government policy that forces refused asylum seekers into destitution, while they continue to fight for a safe haven from persecution.”

The Council also called on the UK Government to change its policy to allow local authorities to assist asylum seekers in danger of destitution.

Councillor Ron Stone moved that:
“In exercising their Human Right of Free Speech in their own countries, many
asylum seekers have received death threats, suffered beatings and threats to their family members, forcing them to abandon their homes, their country and all their
possessions. If their cases are refused they lose financial support and accommodation. Current laws prohibit their right to work.

“If our proud declaration stating Bristol IS a City of Sanctuary is to be meaningful and worthy of it’s fine words we MUST act to improve this situation.” as follows
Bristol City Council welcomes the Glasgow City Council initiative in passing a motion, highlighting the concerns for refused asylum seekers, and lack of support and facilities UK wide. And also approved that Bristol City Council join the Still Human Still Here campaign, becoming the first city to join the campaign coalition group.

Responding to the debate before councillors voted, City Mayor George Ferguson said: “We should not tolerate destitution in our city for any reason” and that He will speak with the leaders of the other core cities and encourage them to join him in writing a letter to the minister of state deploring the government policy that forces refused asylum seekers into destitution.”

Presenting a public statement in support of the motion in the City Hall Chamber, Rev Richard McKay, Chair of Bristol City of Sanctuary called ‘for action to make Bristol a real city of sanctuary.’

He said: ““Destitute asylum seekers by government decree they have no roof, no clothes, no food, no decent healthcare.“The government voted against detention without trial for terrorists, but not for asylum seekers.

“This motion cries out with suffering, that you can do something to help and deserves to be passed unanimously. Do the right thing for your brothers and sisters and for your city. Transform the life of the partly living into a life of hope, freedom and opportunity.”

For the webcast taken at the debate, please visit: https://bit.ly/X2z5Q8