Fear, Shame and Destitution: The Impact of The Nationality & Borders Bill 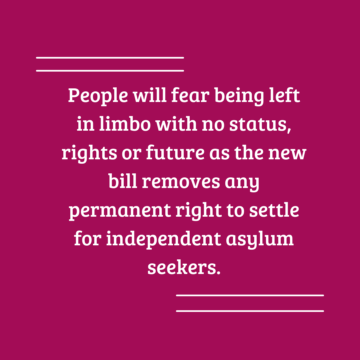 As part of our series exploring the impact of the Nationality and Borders Bill, Borderlands, The Haven and Trauma Foundation Southwest have written about how the bill will affect the physical and mental health of people seeking sanctuary here.

As organisations who support asylum seekers and refugees with their health, mental health and wellbeing, we are horrified about the likely impact of the Nationality & Borders Bill on asylum seekers, charities and services who support them, and the British public.  By creating a discourse of criminalisation and an artificial distinction between asylum seekers who journey here alone to find safety and those who manage to access resettlement schemes, this bill will increase fear, shame, limbo and destitution in the UK. It will result in increasing ill health, poorer mental health, increased trauma and poorer wellbeing for asylum seekers who journey here alone. It penalises people based on their arrival route, not their protection needs.

Fear is a familiar emotion to all asylum seekers and refugees – the fear of persecution that forced them to flee their homes, their families, their lives and home countries; the fear of exploitation and mistreatment on their journeys here; the fear of a new culture, language, an incomprehensible asylum system.

But this bill adds new, more tangible fears hardwired into the system for those who arrive by themselves such as the fear of being disbelieved when a One Stop Appeal allows no time for those who have suffered trauma or torture to mentally and practically get their information across.  People will fear being left in limbo with no status, rights or future as the new bill removes any permanent right to settle for independent asylum seekers. Indeed, constant immigration checks will keep the fear of deportation foremost in everyone’s mind.

There will be increased fear of accessing healthcare early on in their symptoms in case someone hands them over to the authorities, or charges them. This already leads to greater costs for the NHS, when severely ill asylum seekers need urgent, late-stage treatment; or pregnant women face ill health for themselves and their babies as they were afraid of accessing maternity services.  Asylum seekers might be too afraid to seek services and this can lead to late diagnosis of chronic diseases, for example cancer, diabetes, high blood pressure and infectious diseases like Tuberculosis and HIV. Despite all the best efforts of charities and services, the system is already confusing. By taking away more rights, asylum seekers will hide, face ill health and likely exploitation.

How will the British public distinguish between resettled and independent refugees?  The criminalisation of asylum seekers will create fear in the public for all the people who come here.  And fear often brings hate. As charities who know the impact of hate crime on people’s wellbeing, we fear this bill will increase the number of people facing abuse.

The new bill will add to the shame that is already dominant for asylum seekers fleeing their home country, unable to work, a previous life’s achievements invisible in their limbo of not being able to work or go to higher education.  And finally, expect to see far greater numbers of asylum seekers who are destitute in Bristol as there will be no money for those at the end of the process.  Destitution leads to the worst health, mental health and wellbeing outcomes, increases suicide rates and makes people vulnerable to exploitation.

We see a deeply sad future for independent asylum seekers after this bill is enacted – one of fear, shame, limbo and destitution.  We urge you to act now and speak out.