It is the Anti-Refugee Bill or to be more precise, the Anti-Asylum Seeker Bill. 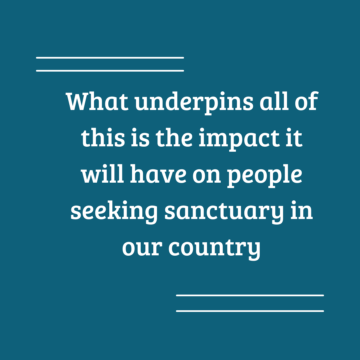 It is the Anti-Refugee Bill or to be more precise, the Anti-Asylum Seeker Bill.

Whilst the Nationality and Borders Bill deals with issues around nationality, trafficking as well as asylum, it is the provisions relating to asylum that are most concerning for the Bristol Refugee and Asylum Seeker Partnership (BRASP). BRASP is made up of 16 organisations supporting asylum seekers and refugees in and around Bristol, working together to make the city a welcoming place of sanctuary. This is the first in a series of blogs from BRASP talking about the impact of this Bill on our service users.  In this, the first in the series, a short overview of some of the most concerning provisions of the Bill and why these provisions have us so worried.

The Law Society of England and Wales has warned the plans are likely to breach UK obligations under the 1951 UN Refugee Convention.  Fundamentally however from reading the bill, this is not an inadvertent mistake by the UK government.  It is intentional and as there is no arbiter of international law to which people can take this challenge, the fact the UK government is in breach of the Refugee Convention will not be simple to challenge/overcome.

A number of the things put forward in the new Bill are in fact not new or are already possible within the Secretary of State’s powers and so seem to be about making a point about being tough on asylum. It is part of a wider narrative that places people seeking sanctuary as a threat, whilst also chipping away at a person’s right to seek protection from violence and persecution.

A number of clauses in the Bill make provision for, or make it possible for the government to do something.  The devil will be in the implementation of these provisions and the arrangements they can make to realise this approach, much of which is as yet unknown.

Some of the key changes the Bill is attempting to make include:

Over the coming weeks, as the Bill works its way through the committee stages of parliament, organisations who are part of BRASP will share their thoughts and concerns about the impact that the Bill will have on people seeking sanctuary in Bristol.

You can join the campaign against the bill by signing Bristol City of Sanctuary’s statement: https://bristol.cityofsanctuary.org/seeking-sanctuary-is-a-human-right