‘It takes a village to raise a baby’: The impact of the Nationality and Borders Bill on Expectant Mothers 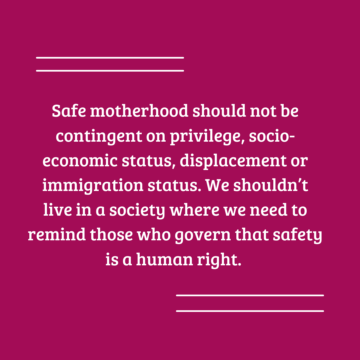 As part of our series exploring the impact of the Nationality and Borders Bill, Project Mama have written about the impact of that the bill will have on expectant mothers.

Project MAMA provides one-to-one birth companions to migrant women and displaced people to ensure they give birth safely, can make informed choices and receive the nurturing support they need for a positive birth and early parenting experience. We seek to improve the health & wellbeing in women who often experience multiple disadvantages, exacerbated by displacement.

Many mothers-to-be we support have already faced the ‘triple arrow’ of trauma: being displaced from their country of origin, the frequently dangerous journey people make to find safety, and arriving in an already hostile immigration system in the UK. For people seeking asylum who may have experienced torture or trauma, mental health issues are already exceptionally high, even before they reach countries of resettlement.

As the truism goes, ‘it takes a village to raise a baby’, and we can all understand that  adequate support, companionship and a community around a new parent is vital to ensure the best start to a child’s life. Ensuring a mothers mental health and wellbeing so they have the wherewithal to be primary caretaker, often with no resources, money or place of safety, should be a non-negotiable. Safe motherhood should not be contingent on privilege, socio-economic status, displacement or immigration status. We shouldn’t live in a society where we need to remind those who govern that safety is a human right.

In the current political climate, the aptly named ‘Hostile Environment’, we constantly encounter pregnant mothers burdened with immigration anxieties which undoubtedly have detrimental ramifications on health and wellbeing outcomes. We are seeing an increased number of newly arrived women seeking safety in the UK, already heavily pregnant, afraid to access maternity care lest they be charged vast amounts of money or even deported. We commonly see a cascade of birth interventions sky-high, compared to British-born women, instead of the necessary swirling hormone-soup required for a safe and happy birth. Mothers are stifled with fear, adrenaline and uncertainty, concerned about whether they’re likely to be housed or detained after leaving hospital. The irony of a new mother holding a new life in her arms with little choice or understanding of the direction of her own is not lost.

In spite of the Home Office having a duty of care to safeguard pregnant women and their dependants, Priti Patel’s proposed bill (appropriately dubbed the Anti-Refugee Bill) could see a significant increase in pregnant women being detained and removed from stable and appropriate maternity care and access to support networks which vastly increases the likelihood of intervention or birth trauma. In addition, if Patel adopts the ‘Australian Model,’ as posited, the criminalising of those seeking safety coupled with the use of offshore ‘processing centres’ without adequate maternity care and support could mean a return to the draconian days of avoidable and dangerous perinatal outcomes.

As an organisation, as humans, as parents ourselves, we vehemently oppose the new Nationality and Borders Bill. We are appalled that the leaders of this country are, by design, putting the most vulnerable at risk; survivors of trauma, gender-based violence, human trafficking, civil war and environmental chaos. Pregnancy places an additional vulnerability on these people and can have devastating consequences. Criminalising those who have already had their humanity removed and voices silenced, denies people from seeking healthcare or vital help which puts lives at serious risk.

The proposed Nationality and Borders Bill revives and reinstates the damage initiated since the colonial past, disregards our own Human Rights Act and asks healthcare workers to neglect their duty of care in favour of penalising those seeking safety. Project MAMA adamantly opposes it and we stand in solidarity with displaced mothers, their babies and all refugees.