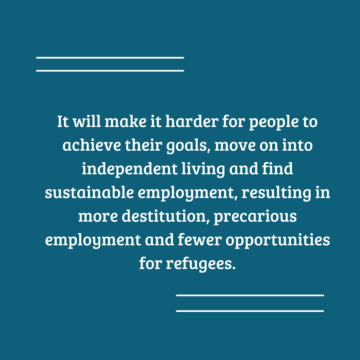 As part of our series exploring the impact of the Nationality and Borders Bill, Ashley Community Housing have written about the impact of the bill on people’s lives in the UK, specifically the move on period and employment.

In the UK asylum system, when a person has their asylum claim accepted and their refugee status granted, they are given 28 days before they have to leave their government accommodation. Imagine trying to find a house, an income, a bank account, a GP in 28 days in an unfamiliar country. At ACH, we aim to bridge this gap, helping newly arrived refugees build lives in the UK by providing safe and supported housing, free training, family reunion guidance and entrepreneurship advice. The situation is already so difficult for newly arrived refugees, and the Nationality and Borders Bill will only make integrating into life in the UK, finding a job and putting down roots so much harder.

We are concerned about the effect the Nationality and Borders Bill will have on newly arrived refugees ability to move on into independent lives and find sustainable, ambitious employment. The Nationality and Borders Bill proposes a two tier system for people in need of protection. Under the Nationality and Borders Bill, refugees who arrive via ‘regular’ resettlement routes will be placed in one category and will enjoy full protection and resettlement support. People arriving via ‘irregular’ routes may have their claim deemed ‘inadmissable’ and face removal to a third country; if they cannot be removed to a third country, they can claim asylum but the proposals mean they may only be  granted ‘Temporary Protection’ rather than full Refugee Status.

Temporary Protection status will make move on and employment a harder goal to reach for newly arrived refugees. It is far more restrictive than a Refugee Status, granting leave to remain for only 2.5 years. After 2.5 years, a person would have to apply to extend their status, at which point the Home Office will be able to review their case and look for an opportunity to revoke the Temporary Protection if possible. This will introduce a huge amount of uncertainty into people’s lives, and will be a severe psychological pressure on people worried that if they invest in their new lives in the UK, they could have everything they’ve worked for taken away.

People with Temporary Protection may have very restricted family reunion rights. The pain of separation for an indefinite period of time will make people unable to ever settle and integrate meaningfully in the UK. We find that it is exactly when their family joins them that people start to feel safe and comfortable enough to engage positively with education, employment and the wider society.

Refugees arriving via ‘irregular routes’ mayalso be subject to a No Recourse to Public Funds (NRPF) condition on their Temporary Protection Status. A NRPF condition means you are unable to access certain benefits (e.g. Housing Benefit, Universal Credit, Child Benefit), and will not have welfare to fall back on. This means that after receiving your refugee status, you would have 28 days to find a job and a house to rent, or risk homelessness and destitution. This is simply not feasible for many refugees who face the long term physical and mental effects of past persecution and violence. Placing a No Recourse to Public Funds condition on a population with high rates of PTSD, who may not have any support network in the UK and normally have limited levels of English is almost certainly going to produce high numbers of destitute people.

Forcing people into a position where they have very limited access to education and must spend all their energy on meeting their basic needs of sustenance and housing will limit meaningful integration and make people vulnerable to exploitation. Limiting people’s access to education will be a barrier to people getting the qualifications and skills that are vital to securing stable and meaningful employment. These people will be trapped in low skilled, precarious, poorly paid work and will be unable to fulfil their full potential. This robs the individual of opportunities and deprives the UK of a potentially skilled workforce.

Ultimately, the Nationality and Borders Bill will create an unfair two-tiered system where the most vulnerable refugees are penalised because of their route of arrival. It will mean that this group will have reduced opportunities for education, integration and employment in the UK. It will make it harder for people to achieve their goals, move on into independent living and find sustainable employment, resulting in more destitution, precarious employment and fewer opportunities for refugees.