On Saturday 14th of August a group of people, dedicated to building a movement of welcome, walked around the centre of Bristol to raise money for our Sanctuary Transport Fund. The sponsored walk had two aims, firstly to raise money to help those seeking safety in the city and in doing so to raise awareness of the desperate circumstances some are forced to live in, and also to learn of the many sites in Bristol that have links to the slave trade . We are delighted to announce that so far the walk has raised £2626! 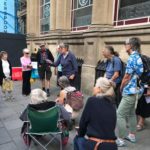 The group of people came from across Bristol to meet at 10:30am on Guinea Street, named after the Guinea Coast in West Africa and the site of homes belonging to former slavers. Their walk lasted around four hours, taking in different sites across the city associated with the slave trade as well as sites that were witness to resistance. At each site, the group paused for talks on the horrific part in history that Bristol played, whilst also reflecting on the unjust treatment of people in today’s society. The message throughout the walk and at the John Wesley Chapel was that – if we intend to stand in the shoes of the Abolitionists, it is our moral duty to speak out now to oppose the Nationality and Borders Bill and to defend the rights of people seeking sanctuary. Signing the Bristol City of Sanctuary Open Statement is one way of doing this. https://bristol.cityofsanctuary.org/seeking-sanctuary-is-a-human-right

The walk lasted around four hours, ending in John Wesley Chapel where the walkers were welcomed in with music. They then sat and listened to musical performances, along with speeches from Cllr Amirah Cole, Forward Maisokwadzo, Inclusion Adviser to the Mayor of Bristol, and Anthonell Peccoo, a member of our Bristol community who is being threatened with deportation to Jamaica. The speeches ended with words from walk organiser, David Bray, being read out. David, who could unfortunately not make the event due to self-isolation, will be walking the route himself this Saturday at 10:30am to honour his commitment to raising money once he has finished his isolation period.

All of this was in aid of our Sanctuary Transport Fund, a partnership with First Bus which sees them generously match fund each ticket that we raise money for. These tickets are then passed to our partner organisations, who give them to people seeking sanctuary who would otherwise be unable to access medical and legal appointments and support services. Not only is the amount raised fantastic, but it demonstrates the strength of solidarity in our city for people seeking sanctuary.

A huge thank you to all involved.